Grand Salami Betting (Everything You Need to Know)

It’s a bet that’s only available in either baseball and hockey and refers to one big cumulative total for all of the games on the board on a given night. If that sounds a bit confusing, we’ll explain below and talk about the strategy of betting on the Grand Salami.

What, Exactly, Is the Grand Salami?

A Grand Salami is just a total (also known as an over/under) posted by the oddsmakers, except that instead of determining the total of a single game, you’re trying to predict the entire combined scores of every team in every game within a particular league. In general, the Grand Salami is only used for hockey or baseball.

To better illustrate how the Grand Salami works, let’s use the following example where there are three baseball games on the board for a given day: 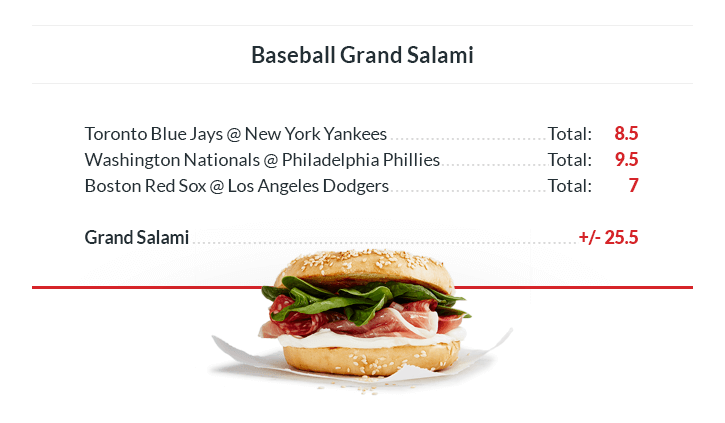 As you can see in this example, we have three baseball games on the board. When you add the over/under numbers for the total runs of each individual game (8.5 + 9.5 + 7), you get a combined total of 25. Though, the Grand Salami is set at 25.5.

What you’re left to determine is whether the combined score of the six teams that are playing will go over or under the posted Grand Salami (25.5 in this case). If the finals scores are 10-9, 12-8 and 7-5, then the combined scores are 51 runs and you’ve gone over. If the three games finish up 4-1, 10-1 and 2-1, the scores add up to 19 runs and the total is under the Grand Salami. 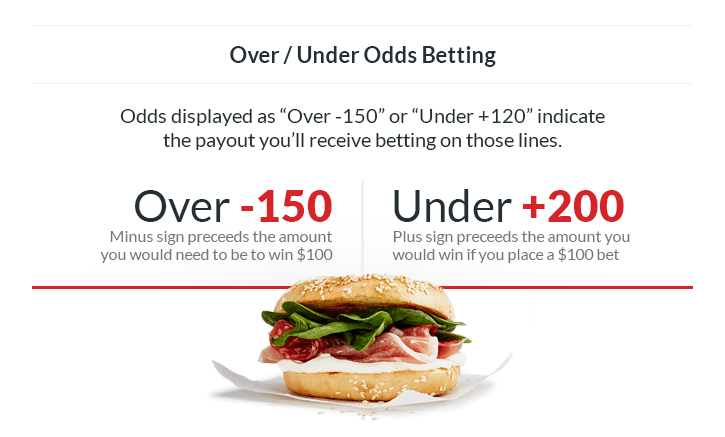 You aren’t tied to betting in $100 increments, but they provide you with the information you’ll need to calculate your prospective winnings.

Where Can You Find the Grand Salami?

Almost every sportsbook has a Grand Salami each night for the NHL and MLB games on the board. When you log into your account, check the sportsbooks’ hockey or baseball sections, and you’ll find the Grand Salami under either daily lines or prop bets.

There have long been rumors of possible Grand Salami for the NFL or NBA, but they are rarely seen. Sometimes for big events, like a Conference Championship Sunday in the NFL or the NBA playoffs, you might see a Grand Salami.

However, for the most part, Grand Salami bets are not available with any regularity for sports other than hockey and baseball.

How Is the Grand Salami Created?

Sportsbooks actually use different formulas to get to the Grand Salami number. The first step is to add the posted totals for all the games on the slate on a particular night.

The number usually gets tweaked a little bit for a number of reasons, usually relating to weather, pitchers, lineup changes, or momentum. The Grand Salami will always be close to the sum of the individual totals, and sometimes, it’ll match up with it.

The Strategy Behind Grand Salami Betting

Now that you have an understanding of what the Grand Salami is, let’s focus on the strategic part of the equation.

Understand Exactly What Over/Unders Are

A lot of bettors are familiar with betting on sides—who’ll win the game, who’ll cover the spread—but betting on totals is less common. Handicapping the total is a completely different endeavor because you have to look at the game from a new perspective before determining whether you’re betting over or under.

Do the matchups look like they’ll be high-scoring shootouts or defensive struggles? Will the weather be a factor? Who are the starting pitchers (in baseball) and goaltenders (in hockey)? What will the flow of the game look like?

That’s why it’s important that before you bet the Grand Salami, you should get the hang of betting individual game totals first.

The Grand Salami In Hockey: What to Consider

When you’re betting on the Grand Salami in hockey, the main thing you’ll want to look at is the starting goaltenders. For example, if you see five games on the board and the news reports suggest that its mostly backup goalies who are going to be getting the nod, then you might want to bet the over.

The other main factors you’ll want to take note of are rest and injuries. Rest is crucial as hockey teams can have three or four days off in between games, or they might be playing back-to-back nights on the road or their third game in four nights. When that happens, fatigue becomes a factor, and that can impact scoring. Fatigue can lead to sloppy play defensively or lead to dead-legs on offense, as teams often can’t replicate with the same energy they showed the night before.

Being that hockey is a very physical sport, make sure you know who is suiting up and who is out due to injury. For example, if Alexander Ovechkin, one of the best goal scorers in the NHL, is sitting out a game due to rest, that will have a big impact on the team’s scoring output.

What to Look for Betting the Grand Salami in Baseball

There are more elements that come into play when handicapping the Grand Salami in baseball.

The first, and arguably most important, are starting pitchers. If there are a number of aces on the mound, that could lead to a day of lower totals and an under in the Grand Salami. If you see teams are at the end of their rotations and starting fourth or fifth starters, you might consider betting the over.

Beyond just who is on the mound, you’ll want to track how those pitchers do against their opponents. Baseball is a numbers game, so it’s relatively easy to find statistics that show you how pitchers perform against a given opponent, batter and so on. Player profiles on Yahoo! Sports are a reliable source of such information. To see how a player performs in all sorts of different scenarios, go to their page and look under Splits stats.

These statistics are crucial, as some pitchers might thrive at home but struggle on the road, or they might dominate one opponent but get tripped up with another. Studying the matchups is integral.

Additionally, you’ll want to keep track of the weather. Depending on which way the wind is blowing in certain stadiums (especially Wrigley Field), it could encourage the balls to fly out of the yards or keep those hard shots within the confines of the stadium.

Much like in the NHL, you’ll also want to keep track of rest. Baseball is a sport where teams play almost every day, but there’s usually one day a week where teams get an off-day.

If not the entire team, some players will get a breather here and there. If a superstar like Mike Trout or Bryce Harper is getting the day off, you have to account for that as it will impact the total for the game as well as the Grand Salami.

Postponed Games Can Render No Action on the Grand Salami

Make sure you always check the terms and conditions of the sportsbook you’re playing but as a general rule, if any game is postponed, the Grand Salami is a push (it will be graded no action) and your bet will be refunded.

This is more of a consideration in baseball, as games being postponed is far more common in baseball than it is in hockey.

Betting on the Grand Salami

Now that you have a clear understanding of what the Grand Salami is and fundamentals of the strategy for how to bet on it, a good place to start is to track the numbers in your sportsbook. Get a feel for where the total sits for each game then look into the Grand Salami for the whole night.